andrewnathanhood.com
Posted by Andrew Hood at 5:54 PM No comments:

I'M FAT AND NOBODY LIKES ME

Reading Pardon Our Monsters for book club but haven't gotten around to actually reading the stupid thing? Good news! A couple kids hanging out cross-legged on the grass summed that rotten chestnut up in a fussless, mussless two minutes and forty-seven seconds.

Posted by Andrew Hood at 6:57 PM No comments: 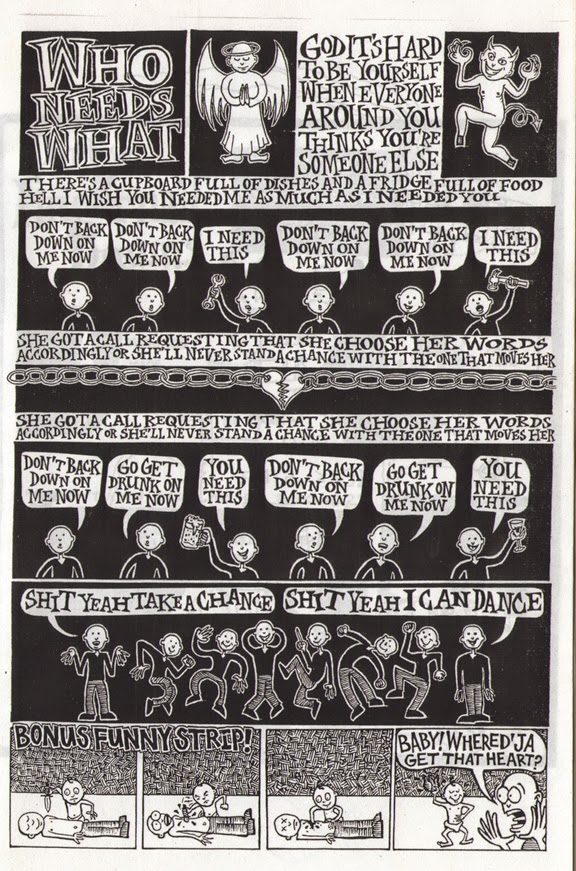 The original release of Jim Guthrie's A Thousand Songs in August of 1999 was accompanied by an incredibly fresh Lyric Picturebook, featuring visual realizations of Jim's jams by a cadre of Guelph artists. The above articulation of the song from which the forthcoming Jim Guthrie Tell-All takes its name comes courtesy of Steve McCuen. (The Bonus Funny Strip is a nod to the first song, "Baby Where'd Ya Get That Heart," off Jim's first tape--1995's Home Is Where The Rock Is.)

Posted by Andrew Hood at 6:19 PM No comments:

BECAUSE IT'S DONE DOES NOT MEAN IT'S GOOD. 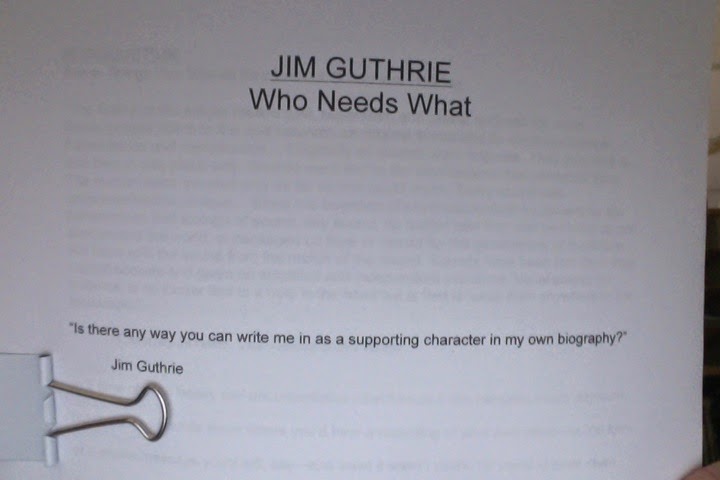 Well, it's not done-done. But after a year and about fifty subjects interviewed, I've got a bunch of pages I can pinch together with a binder clip.

Posted by Andrew Hood at 5:20 AM No comments:

A CUPBOARD FULL OF DISHES AND A FRIDGE FULL OF FOOD I know you complete strangers worry, but don't. I'm getting enough to drink. Plus, I'm managing to get some work done in there somewhere, too. If there's a god in heaven and a beer in the fridge, I'll have a new book loose in the stupid world by Spring 2015.

If you're familiar with my previous writing, you'll know that I've mostly addressed how terrible everything and everyone is. Which is all well and good and sometimes true.

But this new book I've got loaded in the chamber addresses how awesome some things and some people are. It's a book about Jim Guthrie--the musician, not the race car driver. Over a twenty year career, Jim's been a key propellant in a major local music scene in my hometown, a contributor to the indie rock renaissance that took hold in post-millennium Toronto, and most recently revolutionized video game scores. Jim's an awesome dude, and everyone he's helped and been helped by his whole life are awesome people, and this book--"Jim Guthrie: Who Needs What," a member of Invisible's Bibliophonic Series--may be awesome, too.

One of the guys I interviewed for the book turned that interview into a podcast, which you can hear HERE. Might give you a good idea of what this is all about.

If this book comes out, you'll just want to spend the rest of your life listening to Jim. So how about you start now:

"Not a Scratch on Him"


There was light on in this guy—so to speak—but there wasn’t necessarily anyone home. It was a lambent look he had, like—if he was a house, like I’m saying—a lamp had been left on as salient proof to a home invader that someone may be there. Personally, I leave the TV on. It’s a killer on energy, but I’ve never been robbed. Plus, I hate coming home to a silent home.

A dim ruse or no, this nitwit had been leaving weird messages on my friend’s daughter’s answer machine. Apparently he’d recited deals from that week’s flyers, but for some reason in a sexy voice. I’d gone to where he worked at the pharmacy to get an idea about him. Asking after stationary, he’d sent me to family planning aisle. I went back for him, but he was gone.

The Internet got me to his house. When he saw me on the porch, he turned and ran into a tree. I stood over him, smacked him once. Then a second time.

Before he could answer, a light came on in the house across the street. I cuddled into the kid and hid behind the trunk and waited. Soon a couple came out of the house, locked the door, and drove away.

“I’m sorry for fucking everything,” the nitwit simpered into my ear, our faces pressed together. He was bleeding a lot, but not on account of anything I’d done.
Posted by Andrew Hood at 1:00 PM 1 comment:

Andrew Hood
Wrote two books of short stories: "Pardon Our Monsters" (2007) and "The Cloaca" (2012). The former was given the Danuta Gleed Award, the latter was full of Journey Prize nominated stories. "Jim Guthrie: Who Needs What" is due out in April 2015 from Invisible Publishing.